Just when you thought the posts about Farm Crawl were through for the year (honestly I did too), this arrived in our email box.


How cool is that?
This video was shot and produced by Farm Crawler Patrick Boberg.
And honestly, its the first time we've gotten to see the whole crawl since we are always tethered to our own farm. So thanks Patrick for the wonderful video and for sharing Farm Crawl 2009 through your eyes. We think its brilliant!
Posted by BlueGate at 7:00 PM 5 comments:

No, not the actual holy basil, just the exclamation that I uttered when I first saw the leaves like in the photo below.

We have been trying to get all the mid-season crops cleared from the high tunnels. But before the chance was past, I wanted to get photo evidence of the amazing results in our basil crop. We grew two varieties of basil in the tunnel, the Genovese was as expected, nicely sized and productive, but the real treat was the Lettuce Leaf Basil. The seed was sourced from Baker Creek Heirloom Seeds. 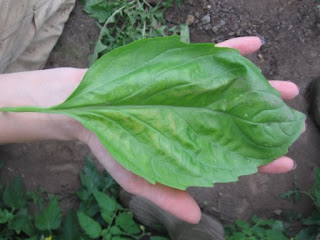 The field-grown plants were similar to the Genovese, nice, but not particularly special. But those in the tunnel were amazing. Basil leaves the size of my hand... and nice flavor to boot! I think this goes on the annual high tunnel crop list as a "must have"!
Posted by BlueGate at 7:13 PM No comments: 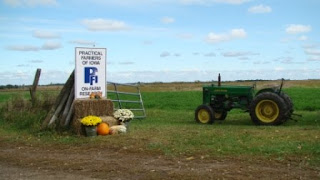 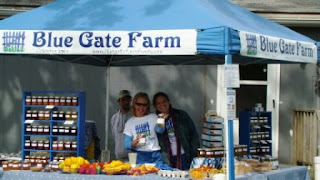 Our awesome sales team is ready to move some product 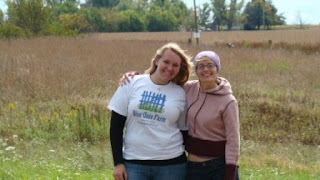 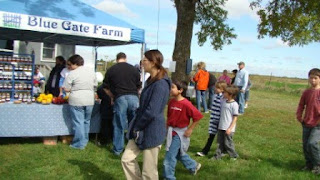 The crowd rolls in... 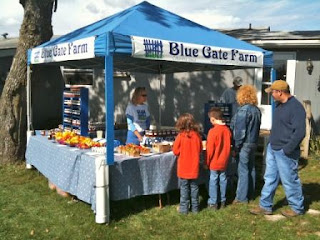 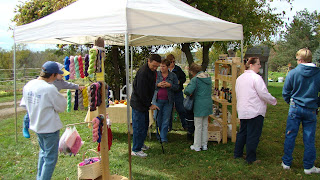 We love hosting Willow Ridge Fiber at BGF...lots of fibery goodness for everyone! 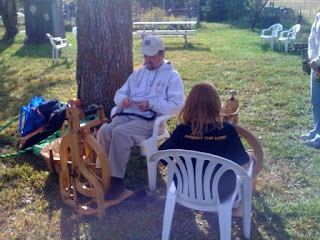 John peaks the interest of a future spinner. 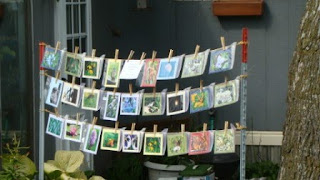 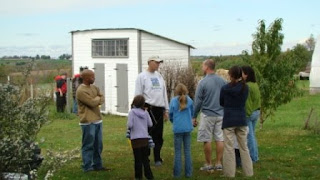 Sean gives one of the many tours of the day
Posted by BlueGate at 9:29 PM No comments:

Farm Crawl 2009 is now history. Holy cow and what a day it was!!
The weather was mild, the winds light, and the people enthusiastic! Here at Blue Gate we counted more than 960 visitors, that's about 350 more than last year. Again, holy cow!

It was truly a great day and we couldn't have done it without the wonderful help of our family and friends, and Blue of course! In addition to all of their help setting-up, manning the booth, parking cars, demonstrating the new baby chicks (thanks Megan!), demonstrating spinning and helping clean-up, some of our amazing friends and family also managed to find time to take pictures.
Will try to get those up by tomorrow. All in all it was an amazing day, huge thanks to all who helped and to everyone who came out to enjoy a beautiful fall day in the country!
Posted by BlueGate at 7:41 AM 1 comment:

For the uninitiated, Farm Crawl is a group of diverse, small family farms in south-central Iowa who get together every year and host simultaneous open houses. The farms are situated in a rough circle around the bustling metropolis of Melcher-Dallas . The route includes a goat dairy, corn maze, pumpkin patch, vegetable farms, an apple orchard and a locally-harvested pottery.

We here at Blue Gate Farm are the slightly twisted instigators of this event which we modeled after our favorite Art Crawl in Houston. We started with 5 farms in 2007 and are now up to 7 farm locations and featuring 9 local families. There were some doubts in that first group (most of them our own), but everyone decided it was worth trying, hoping we would at least get 50 people to come out for the afternoon. Imagine our suprise when more than 500 people showed up that first year. We were all a little overwhelmed and absolutely thrilled.

The event has continued to grow and develop, while still remaining small enough that our country roads can handle the increased traffic. Interest has grown and at least one other event in has been modeled after our Crawl.

So if you're within driving distance...come on out for a day in the country. Pet a goat, eat an apple, see the baby chicks, get lost in the corn, talk to the turkeys get your picture taken with a giant pumpkin and take home a souvenir pottery piece...its all here, in the beautiful rural Iowa countryside!

For more info, directions and a listing of the individual farms, check out the website at www.farmcrawl.com
Posted by BlueGate at 8:59 PM No comments: