When the Snow Flies

Most of you know that we do quite a bit of season extension on our farm. We use low tunnels in our South Garden to extend our field harvest and also have the two high tunnels to get us into the back-side of the growing season. These are amazing tools, but they are not flawless. If the ambient air temperature isn't above freezing, then we can't harvest (especially leafy greens). Now in the tunnels, it doesn't take much sunlight to get the temps above 32° but heavily overcast days can still delay the harvest. One of the other tricky things about harvesting at this time of year is that even when the tunnels get warm enough to harvest, we still have to get the vegetables into the house without freezing.

We've learned a few coping techniques over the years. If you're just harvesting enough for supper, then you can tuck your harvesting bag into your coat and make a run for it, though tripping with a coat full of kohlrabi can result in some very some ribs.

When harvesting for larger numbers though, a little planning is required. Our best technique is to haul our big market coolers out to the high tunnel and allow them to warm up a bit before packing them with vegetables and dragging them to the house.  Best of all, though is when there is a little snow on the ground, then we just load them up and ride 'em home! We'll try to get a pic of this crazy fun sometime yet this season ; )
Posted by BlueGate at 8:40 PM 2 comments:

End of an Era 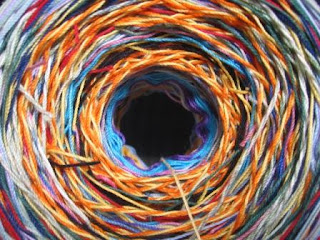 Hmmm, what exactly are we talking about here? Looks more like a crazy technicolor hurricane than an era or anything else for that matter. So any guesses as to what exactly this is? Come on, share...you guys are creative!

So the picture above represents an accumulation of more than six years worth of crochet cotton. Why in the world would anyone need such a thing? Well, for the first 5 years we were at the farm I made crocheted market bags. I made a lot of market bags...A LOT! HUNDREDS...literally! And sold them at our booth at the market. They were a nice complement to the vegetables, they were bright, pretty colors and they didn't wilt in the sun. 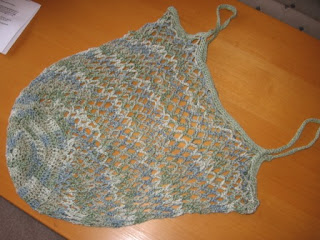 But then the re-usable grocery bag trend hit and anyone could pick up a perfectly usable, sturdy bag at their grocery store (or Menards, the state fair and just about everywhere else). And thus the bottom fell out of the of the "Market Bag" market . But that was ok, really! I was tired of making them and I had learned to spin by then and was considering selling my handspun yarn instead. Done!

So back to that crochet cotton. As with almost any project, there are leftovers...little bits, too much to throw away, but not enough to be really useful. So you stuff them in a container and occasionally wonder what to do with them.  So today was that day when I wondered...and there was an idea. So I pulled out the tote full of cotton and sat down at my yarn ball winder (good thing I got the jumbo-size!) and spent most of the morning winding all those bits of brightly colored cotton into this enormous ball.

Next I oiled up my wheel and pulled out some white Shetland wool and whomped out some lumpy, bumpy (really Maggie, it is!) thick and thin singles to ply against the crazy clash of colored cotton. Really, the whole thing was so much more sedate than it sounds...I was listening to Simon & Garfunkel as I was doing it so that tells you something. But now I have this new yarn to take to market on Saturday and I'm calling it "End of an Era" yarn since it wraps up the nearly endless days of crocheting market bags quite nicely. Its fun and fresh and will go with absolutely anything! And given the size of that ball of cotton...there should be plenty to come! 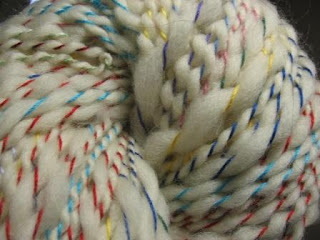