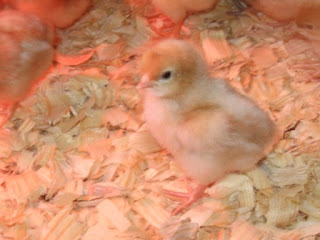 The post office called at 6:15 Friday morning. The chicks had arrived! Though we have done it nearly every year since coming to the farm, it still tickles me to pick up chicks from the post office. It tickled me a little less this time, though. We've never ordered chicks in mid-January and it was COLD!  Day-old chicks don't withstand cold very well and when we opened the boxes, there were at least 15 that appeared dead.

We got them home, hand-dipped each little beak into the waterer so they would understand what that "stuff" was for and tucked them into their pre-warmed tanks in the sunroom. As they warmed up, some of the apparently lifeless birds began to stir a bit so we quickly got them under the heat lamps and hoped for the best. (lesson learned...when its this cold, always get even the limp ones warmed up, you just never know.)

We spent the next 24 hours, hand-watering all those weak little birds, hoping some would make it. So far, some have rallied and others were just too far gone. As of today, we've lost a total of 10 birds from the shipment...better than the original 15 we thought were dead, but still far more than we are used to.

The remaining 120+ birds are doing well, peeping, pooping, running about and sleeping. They are oh-so-entertaining at this stage. Tiny little, beady-eyed fluffballs on toothpick sized legs. 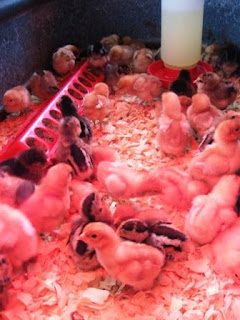 Sorry about the red tint, that is the light from the heat lamps, and using the flash to lighten it up scares the begeezus out of them.
Posted by BlueGate at 10:36 AM

so cute--thanks for the pics!

They are so adorable!

This is a hard time of year to get chicks. Our mail delivery man is pretty cool about putting them up front in the cab with him so they stay warmer! Glad the rest are doing well.

You have yourself some pretty sweet chicks, Jill! Happy you didn't lose more to the cold and conditions. Do they know how lucky they are to be among the ranks of "Jill's Eggs"? ;)

120 chicks? Wow! I take it they're being reared in the barn and not the kitchen?

Nope, in the sunroom attached to the house. No barn here and our winter coop burned down at the beginning of December. So while not in the kitchen, they are still in the house until the sub-zero temps break.