The chicks are finally old enough that yesterday they moved out to the winter coop. Somehow this batch skipped the really awkward "teen-ager" stage and grew quickly into their new feathers, so they are well armed against the winter cold. They aren't suffering too much out in their new digs. The winter coop is nicely furnished with a thick carpet of pine shavings, 3 heat lamps, a 50 lb gravity feeder and a 5 gallon heated water fount. The really cushy part of their new home (for us) is that it is wired with "chick cam" a live video/audio feed that connects to a monitor in our office. This way we can keep tabs on their comfort level without leaving the comfort of our own home. Truly, this is a fine system! Now if I could just load that wood-fired boiler from inside the house too. As I sit here at the computer I can watch the chicks playing on their new roosting boards. They like to jump on and off them repeatedly, then run underneath and over them, just testing out their new skills. Its pretty entertaining (for us and them.)

We are currently experiencing a new aspect to the chick cam. I was working on the computer and kept hearing a strange sound coming from the chick cam monitor, it sounded like static, but it hadn't beem there earlier in the day. Strange...then it occurred to me, it's not static, its sleet hitting the metal roof on the coop. The winter storm that they have been predicting has finally arrived. The forcasts say we should expect up to an inch of ice topped with a couple inches of snow, followed by wind tomorrow. This is a bad combination and more than a little alarming as it is almost exaclty a year ago that we experienced a terrible ice storm that left us without power for five days. Here's hoping that we don't have a replay of that little adventure.

I've been trying to upload a picture of the chick cam screen, but the storm is interferring with our satellite connection. Will try to get one posted when the weather allows. We are currently experiencing thunder sleet, so that nighttime walk down to the boiler is looking less pleasant all the time. It will not be one of those poetic moments on the farm. 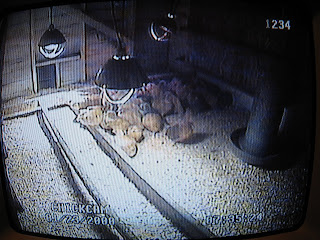 Friday AM update: success at last. This is what we see on our chick cam monitor. It's not the best photo, but it will have to do. Our little digital camera doesn't know what to do with a monitor screen. The weather update this morning is better than we expected. Looks like we got about 1-2" of sleet, but not at least not the 1" of ice they were predicting. We have power and we have internet...what else does a "wired" farmer need?

Greg wants you to know that we're thinking abount you as we sit around the house in our t-shirts and shorts with the a/c on. hee hee. I'm glad your winter storm was not as bad as predicted. That cold front should arrive here sometime on Sunday. Highs in the 30s for us on Monday, but should be back up to the 70s on Christmas Day. :-(
I love the chick cam!! I got a good chuckle. Great idea!

A chick cam? Brilliant. :) Have a Merry Christmas at the farm!

Love the chick cam! Thanks very much for posting the offer to help the other day on our blog - I think we have the heat situation stabilized for now. New boiler on monday, furnace activated yesterday, space heaters in the basement day before yesterday.