Warm, dry spring days tend to be busy here on the farm. This shot was taken at the end of just such a day when The Tall Farmer was just plain worn out... 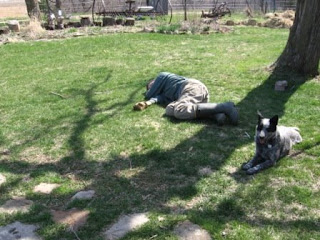 He was sacked out cold (I did check to make sure he was breathing before running for the camera) and slept soundly there for nearly an hour. Blue watched over him and protected him from any opportunistic vultures who might have flown over.
We have done a few things other than nap, new bees have been installed and most of the seedlings have been transplanted up to their pots and are ready to go out the the high tunnel for 'hardening off'. Half of the shelving is up in the smaller high tunnel, ready to receive the seedlings. Much weeding has been done in both tunnels, though there is still much to do. And so farm we are pretty much on schedule with our garden seed sowing. The peas started poking up through the soil in the past couple of days and the asparagus is now growing with purpose. Probably the most exciting new development this week was the nearly magical appearance of our first eggs! Right on schedule (at 26 weeks old) the first of our hens have started laying eggs. We're only getting around a half dozen right now (from 75 birds) but its a good sign that we should start seeing more in the near future.
I know that those of you who know us well probably read the phrase "nearly magical appearance" and thought we had found the first mushrooms of the season, but alas no...just hasn't been warm enough yet. The forcast for the upcoming week is looking good though, so I am predicting that the Morel season will start in southern Iowa within the next 7 days. You can look forward to a full "fungus" report coming soon.
The least exciting event of the past week was the untimely demise of our car (which had more than 150,000 miles on it). Now we are left with "le petite" cargo van for our weekly errands, or one of my parents' cars which they are very generous to lend us. So we find ourselves in the market for a new-to-us car, something with five doors (to facilitate CSA deliveries), good gas mileage and a reliable countanence. This was not a line item on the proposed 2009 Blue Gate Farm budget, so we will see what happens. Until then, if you see a large, white cargo van winding through the gravel roads of Marion County, its just us.
Posted by BlueGate at 6:09 PM

what a gorgeous pic of Sean and Blue....does he know you posted it online!? :)