The bread-baking craze that has been sweeping the nation in the past couple of years has certainly visited here regularly, though mostly during the winter. I am a firmly entrenched acolyte in the Artisan Bread in Five Minutes a Day (AB5) movement. I own the book, I read the website, I make the recipes. Well true confession: I'd been borrowing the book, but have had it WAY too long and need to return it to its rightful owner (Thanks Mama P!), so I ordered my own copy and it should arrive tomorrow.

Anyway, the flatbread recipes are some of my favorites, mostly because I am completely impatient and I LOVE being able to have fresh bread seven minutes after I decide that I want it. One of the recipes that I had been wanting to try was the Za'atar Flatbread (page 161, for those of you with the book).

My first challenge was a lack of the Za'atar itself. Za'atar is a middle-eastern spice blend with ground sumac berries as its base, its a spicy, tart flavor that I just love. Then a couple of months ago I happened upon a new Middle-Eastern market in that had bags of ground sumac and a great price. So a $3 bag of sumac, a little recipe research on the net and I had my very own Za'atar blend. I combined parts I liked out of several recipes, so here's what I used:

Besides the flatbread recipe, Za'atar is great with chicken, lamb or pork. It's also nice on green salads or sprinkled over olive oil as a dip for bread.

The Za'atar Flatbread recipe in the AB5 book makes a foccacia-type bread, that you bake in the oven but I was in a serious hurry, so I made the Naan recipe (page 173) that cooks in s cast iron skillet on the stove top. As soon as the first side cooked, I turned the bread over, brushed with garlic olive oil and sprinkled on the za'atar. Three minutes later it came out of the pan and onto the plate. It was delicious! Seriously, buy the book, make the bread and enjoy...you wont be sorry! 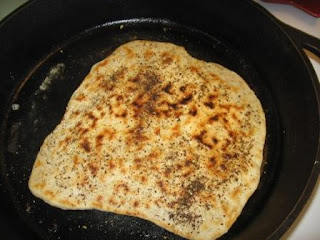 Oooh, yummy! I have the book, haven't tried the flatbreads yet. Now I'm wondering what I was waiting for!

Now you need to get "Healthy Bread in 5 Minutes a day" - from the same authors!

Karen- exactly what i was thinking!

So enjoyed your blog. That blue gate! I just love the way it looks in all that white. And then Blue, what a great looking dog. I am inspired by the bread too. Thanks

Nellie from Beyond My Garden said...

We have similar named blogs. You have some nice pictures. Thank-you.http://beyondmygarden.blogspot.com/