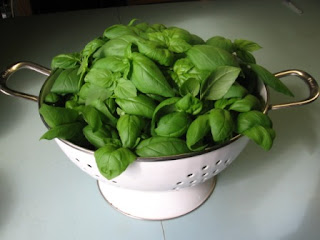 Well ok, not buckets actually, but a really big collander full.
I was a little tardy pinching back the basil starts this spring and when I finally got around to it, they were looking pretty leggy. The pinching back will encourage stronger stems and a more compact shape in the long run. In the short run, it gave me my first basil harvest of the year. Not to be wasteful of such a precious commodity at this time of year, I promptly tossed it all into the food processor and we enjoyed fresh pesto on homemade crusty bread. Ahhhhhh.....
Posted by BlueGate at 7:20 AM 1 comment:

No, its not what you are thinking, it was too damn cold for that!
Yesterday was not a banner day at the farmers market. It was cold and windy, though the sun was out most of the morning. Several market tents tried to make an arial escape early in the day and throughout the morning you could hear the crash of various products, signage and shelving hitting the ground. We gave it up as foolish early in the experience and just took the top off the tent. It looks a little odd, but still allows us to post all our signage and keep our hanging displays without risk of damage to the tent or passers-by. Just think of it as a market booth with a sunroof! 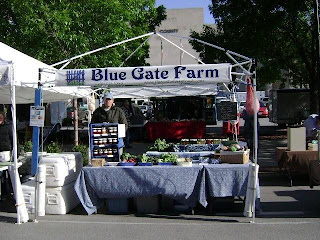 Huge thanks to our customers that braved the cold wind and came out anyway.
We hope next week will bring better weather for the market.
Posted by BlueGate at 8:21 AM 2 comments:

I have been very negligent of the blog recently. I appologize for the long break, but spring on the farm takes no prisoners. Things are being planted, weeded, harvested, weeded, tilled, cultivated, harrowed and yes, weeded. So its a little crazy around here.

We've been trying to make it into the woods for a little mushroom hunting a couple times a week. So far we've found about 9 pounds. Its been a weird year for morels. Our tried and true spots aren't producing but we are finding them in new places. We even had one come up in the flower garden beside the back door! I'm hoping we might get one more flush this week.
Our new discovery on the farm this week was a 3 1/2' long snake. Sean found it in the prairie grass near the lane. I couldn't immediately identify it, so had to take photos and do a little research online. Our new friend is a Prairie Kingsnake, a breif description from HerpNet.net: 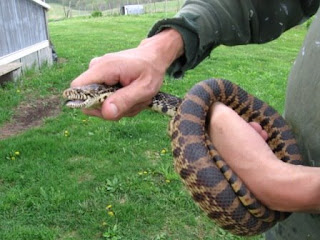 A medium sized Iowa snake that is 30 to 42 inches in length. It is
nonvenomous.

Prairie kingsnakes are dietary generalists and feed on a wide variety of
prey. Mammals, birds, birds eggs, snakes, lizards, frogs, and reptile eggs
have been reported as food. Prairie kings, like other kingsnakes, will eat
venomous snakes. They are immune to the venom of North American venomous
snakes and such snakes will use other methods to escape kingsnakes. Instead of
striking, the venomous species will throw loops of coils at the kingsnake in an attempt to bat the head and make a quick escape. Prairie kingsnakes are even known to consume other prairie kingsnakes (Smith, 1961).
Kingsnakes are constrictors; killing their prey by suffocation before devouring it.

Always something new to learn around here!