As the Parade Passes By

Last night driving home through the fading fall light of rural Iowa, I passed a bit of a parade. Now this wouldn't have qualified as a full-blown city parade complete with floats, marching bands and thrown candy. But here in the country, we take note of the more subtle forms of pageantry. As I drove past a narrow country lane, I was met by the following:
Two women leading a colt
Followed by two Boer goats
Then a girl leading a pony
Followed by a miniature donkey
And bringing up the "tail" was a mule
It was all very dignified, as a parade should be. There was no trotting or tussling, just a quiet progressing down a gravel track.

I would have liked to stop and watch their progress, but while they made a cameo appearance in my world as they moved slowly southward, I didn't want to intrude in theirs.
As I continued down the road I did stop, to let a buck and two does cross the road in front of me. This was a parade of a whole different nature, fast and wild and gone in a heart beat.

It was another beautiful and unexpected evening in the country.
Posted by BlueGate at 7:39 AM 3 comments: 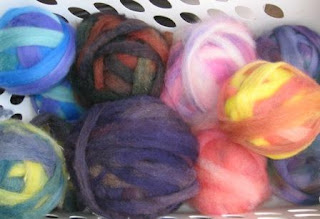 Normally a headline like this would be followed by a photo of a really spectacular bruise somewhere on the body of a particularly graceful farmer. This time it just indicates that I finally got enough accomplished in the garden that I had time to dye some fiber (bumps) this past weekend. Fall is the time that the hand-spun yarn sales tend to take off and we were running woefully low. So now that it is getting dark earlier in the evening, I am ready to do some serious spinning.


Oh and FYI for those of you who might find this interesting, there is such a thing as "too windy to dry wool".
I had hung all the newly dyed fiber on the clothesline to dry and when I looked out the kitchen window later it was as though the house was being surrounded by a crazy, windblown palette of cartoon squids. There was brightly colored wool strung everywhere, all through the garden borders along the house, it was pretty exciting! And when I went out to reclaim it and wind it into the bumps you see in the photo above, the tendrils wound around me too. It made me laugh out loud, though maybe a little nervously!
Posted by BlueGate at 7:08 PM 1 comment: