Well, after several adjustments to my computer settings and several false starts...here I am the guest blogger, bluemom. I have to admit after enjoying Jill's past writings, I'm am more than a little intimidated by the responsibility, but here it goes!
Spring is such a special time on the farm. My two favorite things are birds and flowers (That's right after grandsons "N" & "Z"). Last week we had a wonderful "bird event," when five baby phoebes fledged during the rain. I'm sure the mother bird was having the same thoughts as I did, "why on earth would you choose to leave a dry nest for a wet first flight?" I suppose five baby birds in one small nest was enough motivation for them. Anyway, I was checking the nest as usual ( at least 50 times a day) and they were gone. So, I looked around and noticed the adult flying around a low cart. Sure enough, there was a tiny bird, looking rather forlorn. It was wet and cuddled up to the edge. Another one was near by and it was making quite a racket. I'm sure it was calling out "feed me, feed me." The adults were doing their best to feed everyone.

Later in the day, I was on the other side of the cabin and there was another baby bird sitting on the deck rail. It saw me and did an instant freeze. If you've seen the mad bluebird picture, it was just that same look. I grabbed my camera and started taking pictures. The bird was not impressed! Can you tell? 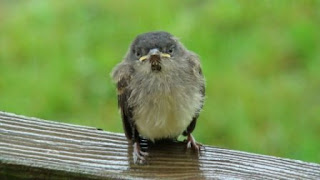 A couple of weeks before this bird event, Jill and I were mushroom and ramp hunting. We saw a baby barred owl. I think she mentioned this in a prior blog. Anyway, I went back later that day and was surprised to find the owl in the same tree as before. So, this time I had my camera and was able to get several pictures. I know 25 is more than several, but that's the beauty of a digital camera. I hope you have all discovered how much fun it is sans film. The owl seems to have the same look that the phoebe gave me. 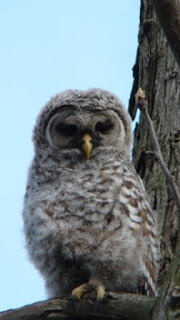 Barred owlet
I hope you enjoy these little neighbors on Blue Gate Farm. We certainly have a wonderful neighborhood.

Very cute -- great to have a guest blogger, Mom BlueGate!

Thanks for the great guest blog Bluemom! WONDERFUL pictures, wow!